The city of Oulu will once again host a feast of Metal in August; Jalometalli, a two-day Metal festival in Northern Finland, already announced the first bands in the bill for August 2014. The Danish… legend, King Diamond, will be headlining Friday, August 8th. Other confirmed artists are Sacred Reich (USA) Dark Angel (USA), Loudness (JPN) and the Finnish Speedtrap and Ranger.

The festival is once again held on the second weekend of August (8th and 9th). This year, the venue will be new, as Club Teatria, the host for the festival since 2006 is moving on to new premises. In the interim, Jalometalli will be held in the vicinity of Ouluhalli, the indoor fair and sports arena near downtown Oulu.

King Diamond will be one of this year’s international headliners at Jalometalli on Friday, August 8th. King Diamond is known for presenting very visual theatrical horror shows. He first became known as the lead singer and co-founder of Mercyful Fate in the early 80s. During his long solo career, he has released 12 studio albums, the latest of which is entitled ‚ “Give Me Your Soul…Please” (2007). The latest appearance of King Diamond in Oulu was in 2006.

Two-day tickets to Jalometalli will be on sale on Monday, January 13, 2014. Advance tickets can be purchased through Lippupalvelu or from Musiikki-Kullas in downtown Oulu. A two-day ticket costs 90 euros, one-day tickets will be released for sale at a later date, when schedules are confirmed. As before, we will have accommodation+Jalometalli ticket packages for two-day visitors later in the Spring.

Jalometalli is open for Metalheads of all ages. We reserve the rights for making any changes to performers or schedules.” 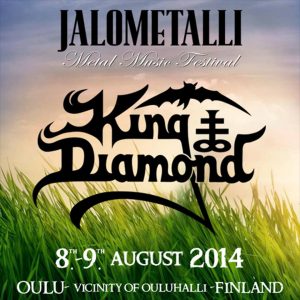